Bullet Point was a response to the process-driven and industrial model of producing animated work that dominated production in the visual effects and CG Animation industry.  I was hoping to use the computer more like a dripping paintbrush, using the suggestions that came as I sloughed through a practice-led stream of consciousness process of animating 4hrs a day for 3months, without storyboard, without intention, open to the possibilities, not editing, using what came before me and incorporating chance, serendipity, random events, mistakes, messes, collisions, breakages.  A system of projection mapping was developed that allowed for a less uptight model making process, and I added the arbitrary limitation of no camera cuts, only animated transitions.  Over time, a narrative appeared that reflected the bizzare relationship between war, retaliation, ethnocentrism, petrol, power, secrecy, malevolence and ultimately consumption.  Looking back now, almost 15 years after it was made, I find it a useful lens to reflect on our collective armchair responses to G.W. Bush's empire building fantasies that uncomfortably wrapped the regretful murders of hundreds of thousands of Middle Eastern lives. 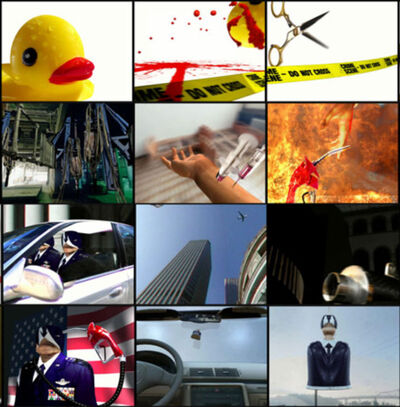 Bullet Point - Chris Barker, 2004.  (Apologies for the woeful resolution of the image - I'm having trouble sourcing a higher res version.)